We're very happy to announce the first gamercards for Halo 5 are available right now, it's taken a few days but we've made sure to make it the best we can.
Head on over to the generators page and you'll find the new generator at the top of the page.
If you're not on the generator page just yet (what are you waiting for?) there's some Halo 5 gamercards right here for you to enjoy.
If you just want to take a look at your own gamercard you could right here.

Aside from these new Halo 5 gamercards you can also expect to see other improvements and additions to the site in the coming months, including the popular auto generation feature for Halo 4 gamercards coming to Halo 5's gamercards.
Read More...
Halo 5
gamercard
new
API
Apr
04

Hey guys, we're now accepting registrations on the new accounts page.
If you're wondering what this is about, we're now allowing you to let us automatically update your gamercard every few days. This means you can enter the details of one gamercard and set the rate at which it will regenerate.
Remember, this is an open beta, so things might not work correctly all of the time. Please do report any bugs you find in the comments below or send me a tweet at @__Caspar__ to let me know.
There'll be more features available in the future, including a custom commenting system for the blogposts, profiles where you can show your gamercards, early access to new generators (2 of which are coming pretty soon).
Read More...
Share
new
auto_updating
gamercard
beta
open
Mar
31

Don't you just love that smell, when you can smell something is new?
This update was a long time coming now, since I've been wanting to update to something like this for months. This does mean I may have rushed it here and there, but I fixed all the big bugs I could so far.
If you're wondering about the 404 on the About page, that's intentional until I put something there, I was just too excited to put this new theme out there

It is also fully responsive and adaptive, so it'll fit perfectly on your mobile devices too.
Read More...
new
theme
update
awesome
Oct
01

As of right now, the brand new avatar generator is fully up and running.
You can now get a very customizable avatar from the armory, right here on Armor Watcher. 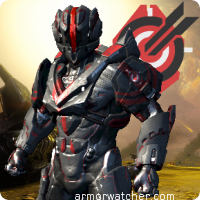 You can choose whether you want to show your emblem or not, whether you want to use an image as a background or a plain color, and whether you want to stand posed or in the default pose.
I may or may not add some more content to the generator in the near future, so you might end up having to regenerate your avatar when something major gets added, which for now seems unlikely.
Please hang on while we work out some of the bugs.
Read More...
avatars
new
Jul
23

Welcome to the latest version of Armor Watcher.
A... 3.0 if you will, seeing the previous version was called 2.0.
A lot of things have happened since I first built Armor Watcher 1.0, mostly for the better, but sometimes things screwed up and I had to go back and redo entire sections of the site.
For example, I had to recode the gamercard generator once because I wanted to use custom fonts, which meant I had to use a different way to generate the images. And even though the gamercards worked great and everyone loved them, my previous host didn't, and shut down my site a few times during peak hours.
Thankfully I've moved to a better host now, so it hopefully won't be much of a problem.
We're probably going to recode parts of the generator to make it take less resources from the server, meaning you guys will likely have to regenerate all your gamercards again in a while.
Anyways, back to the new theme/layout/version of the site, it was changed because the previous version (2.0) had too many bugs in it, and since I had been working on a new site anyways, I decided to borrow the looks from the other site and make everything green, which just so happens to be my favorite color.